Hodgkin Lymphoma
Hodgkin lymphoma (also known as Hodgkin’s disease) is a specialized form of lymphoma and represents about 12.5 percent of all lymphomas diagnosed each year

Myeloma
Myeloma is a cancer of plasma cells, a type of white blood cell found in many tissues of the body, but mainly in the marrow

Leukemia, cancer of the bone marrow and blood, is characterized by the uncontrolled growth of blood cells. There are four main types:

Leukemia, lymphoma, myeloma and myelodysplastic syndromes (MDS) are types of cancer that can affect the bone marrow, the blood cells, the lymph nodes and other parts of the lymphatic system. 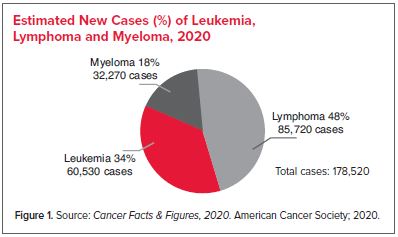 With the release of the 1975-2016 Cancer Statistics Review, the calculation of limited-duration prevalence estimates were modified to use data from the SEER 13 areas (not including the Alaska Natives Registry) using cases diagnosed from 1992 through 2015. Prior publications used data from the SEER 9 registries using cases diagnosed from 1975+. SEER 13 provides a larger population base and one which is more representative of the entire US, which allows better projections of US counts. Due to this methodology change, the estimates may differ significantly from those published in previous years. 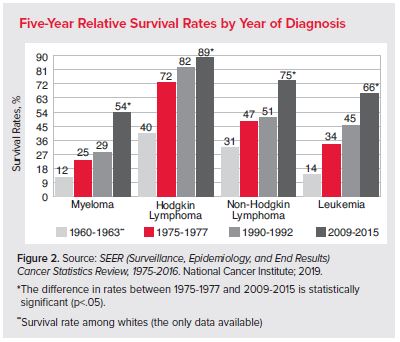 *Data specified for “blood cancer” include leukemia, lymphoma and myeloma, and do not include data for myelodysplastic syndromes (MDS) or myeloproliferative neoplasms (MPNs)

Copyright MLHOPE 2022 - All Rights Reserved
Back To Top